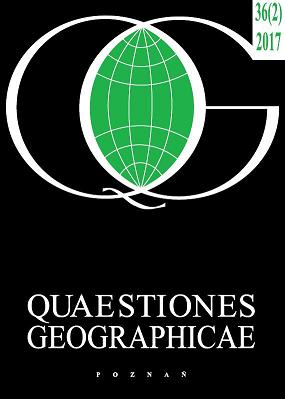 Organic farming is part of a sustainable development model; at the same time it is becoming a prerequisite for the multifunctional development of rural areas. The main aim of this study is to identify the state and analyse changes in the development of organic agriculture in Poland as well as to present the possibilities for its development. The time horizon of the study covers the years 2003 to 2015. The basis of the research was an analysis of the literature, the Report of the Chief Inspectorate of Trade Quality of Agriculture and Food (IJHARS), and national empirical research; it also includes an analysis of the results of surveys carried out on organic farms in the summer of 2016, as well as our own observations. The study showed that in the years 2003–2015 Poland saw a rapid increase in the number and area of organic farms due in part to the introduction of EU subsidies. Spatial analysis of the proportions of farms by voivodeship shows that in 2015 most were recorded in Warmia Mazuria, Podlasie and West Pomerania. Similar to the increase in the number of organic farms, the years 2003–2015 saw an increased area of organic farmland. Poland is second in the world in terms of growth in the area of organic farms. In the years 2003–2014 the average size of anorganic farm remained at about 25 ha and was higher than the average size of conventional farms (10 ha). In 2014 the crop structure was dominated by fodder plants (35.8%), and meadows and pastures (31.5%). In terms of livestock production, cattle and horses had the biggest share.