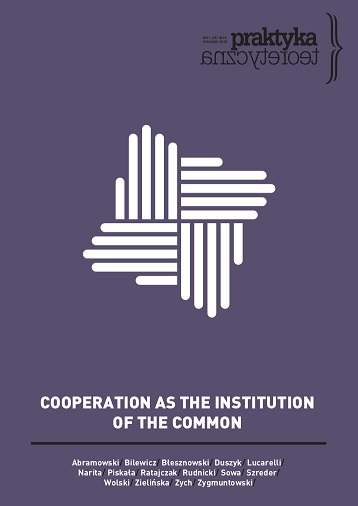 "Stateless socialism‖" is the fourth chapter of Edward Abramowski‘s book Socialism and State. A Contribution to the Critique of Contemporary Socialism. Abramowski, a Polish political philosopher and social theorist, was also one of the founders of the cooperative movement in Poland. Written at the turn of 1903 and 1904 and published in 1904 (Polish Society of Publishers, Lviv) under the alias ―M. A. Czajkowski‖, Socialism and State is one of Abramowski‘s most important works, and is devoted to the philosophical justifications of socialist politics, the subversive character of social facts, and the doctrine of stateless socialism, the realisation of which was, according to Abramowski, the cooperative movement. In opposition to both classical Marxism and the social-democratic trend, which found in the state a tool by which the workers‘ movement would free itself from the chains of capitalism, by taking over, democratizing, and at the same time expanding state institutions, Abramowski proposes a vision of a grassroots revolution of specialised associations. Their ideology does not constitute a political doctrine, but is political practice itself, the domain of the common that allows the masses to create an autonomous subjective experience. Thus, the philosopher presents his concept of class struggle, grasped as a creative element of differentiation of forms of socialisation. This understanding also allows him to define class not as a substantial feature of a political subject, but as a kind of condition or action. He perceives the revolution as a transformation of the subject position in relation to the socio-economic conditions that define it, an ethical change that opens new possibilities for community life in the heart of the ancien regime.

(1868–1918) – socialist, political thinker, social psychologist, theoretician, and popularizer of cooperativism. From his earliest years, he was connected with the workers‘ movement; he helped create one of the first Polish socialist groupings, ―Proletariat II.‖ Living in exile in Geneva, Paris, London, and Zurich, he wrote political and agitprop texts, as well as doing research in psychology and creating the innovative concept of the social self and unconscious. In 1892 he took part in the founding congress of the Polish Socialist Party in Paris. In his political theory, he criticized both state coercion and the free market, creating a model of self-organization and mutual aid based on cooperativism. In 1905 in Warsaw he co-founded the Union of Social Self-Help Societies, which led to the emergence of ―Społem,‖ one of the largest Polish cooperatives. He established the independent Institute of Psychology, and in 1915 became head of the department of psychology at the University of Warsaw, where until his death in 1918 he gave lectures on experiential metaphysics, which were the culmination of his ―ontology of brotherhood‖.
Język / Language
Zgłoś tekst
Słowa kluczowe