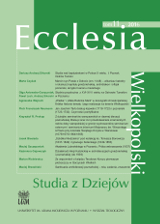 Jan Joachim Tarło belonged to a family whose three members were bishops of Poznań in the first half of the 18th century. Jan Joachim was an alumnus of Jesuit schools and during his sojourn there joined the Society of Jesus which he left in 1689, passing into the ranks of diocesan clergy. In December 1718 he was granted papal provision to the bishopric in Kiev and remained in office until 1723 when he was transferred to the office of bishop of Poznań which he fulfilled for nine years until his death on 13 August 1732. He died in Vienna on his return from a journey to Rome.

From the records in the book it follows that during his ministry as bishop of Kiev, Tarło stayed in the Cracow diocese and discharged his duties there. Interestingly, there is no evidence of his performing any official acts in the area of the Kiev diocese, which must have been connected with the fact that already by then a great part of its territory (the bishopric of Kiev included) lay within the borders of the Russian Empire, whereas the part that remained in the Kingdom of Poland encompassed just a few parish churches.