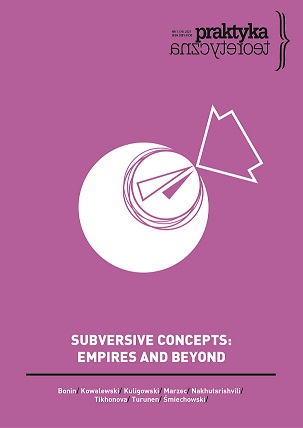 “The worst thing one can do with words,” George Orwell once wrote, “is to surrender to them.” One must “let the meaning choose the word, and not the other way,” to use language for “expressing and not for
concealing or preventing thought,” he continued (1953, 169). For centuries, social movements “let the meaning to choose the words” and actively sought new categories to grasp the world. They also expressed
the desire for a new world but often surrendered to words when imagining it. Medieval heretics, French revolutionaries, and various socialist movements on the fringes of the Russian Empire one hundred years
later, as well as groups like nationalist urban reformers, Muslim modernizers, and democratic antisuffragists–all had to face fossilized concepts that they attempted to question and modify, actively reappropriating them to forge new configurations. They also inherited the existing language and other sign systems, which cannot be modified at will without the risk of losing the capacity to communicate. To paraphrase Karl Marx’s nutshell definition of historical agency, people make use of their concepts but they do not do so as they please; they do not do so under self-selected circumstances but, rather, under the already-existing circumstances given and transmitted in language and social relations.