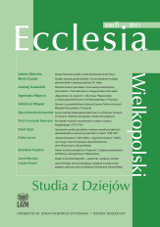 The object of the article is to characterize the transformations of the contemporary pilgrimage movement. The focus is on the pilgrims who arrive in selected places of Marian cult in Greater Poland. They are described using demographic variables such as: sex, age, place of residence, profession and education. An attempt has been made to show the specificity of the shrines in the context of the pilgrimage movement. The results presented here are the effect of many years of questionnaire surveys and archive research conducted at selected cultic sites in Greater Poland: Gostyń, Licheń, Górka Klasztorna, Górka Duchowna and in Rokitno.

Contemporary pilgrimage movement is gaining impetus especially in Poland. The beginnings of the process date back to the postwar years when after the end of the Second World War a rapid growth of the pilgrimage movement was noted. In effect of the change of political system underway at that time, a marked regress in pilgrimages took place in the years 1948 - 1965. But already from 1965 onward a slow development of the movement could be  observed.

Transformations in the pilgrimage movement pertain not only to the number of pilgrimaging persons but above all to changes in the forms and routes of pilgrimages. Collective peregrinations organized by parishes or prayer groups usually choose for their destinations large pilgrimage centres of international renown and not necessarily the ones located in Poland. For instance, in the 1980s Rome was a major destination as Poles wanted to attend meetings with Pope John Paul   II.