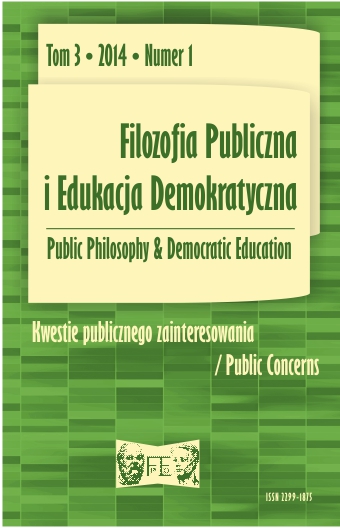 In multiculturalism, “exit”, or to be more precise, “right to exit” is very often thought of in terms of a condition of state’s non-interference in the minority groups. However popular, this account seems to be flawed with a number of controversial assumptions, questionable theoretical and practical implications and can lead to significant paradoxes. First of all, treating “exit” as a state’s non-interventionism condition also means that in fact representatives of minority groups should actually leave their communities in order to obtain all of the civil rights and liberties – be treated as “full”, not “partial” citizens. Various other problems connected with this account (i.a. the issue of general function of “right to exit” and civil rights and liberties or mutual relations between these two categories) presented and discussed in the paper justify a proposal of change of approach towards concept of “exit”. Either one should take really seriously the assumed normative character of it and construct a whole separate theory of “right to exit” from scratch, or maybe one should simply stop treating leaving one’s oppressive culture in terms of “right” or “freedom” and understand it only in descriptive manner.