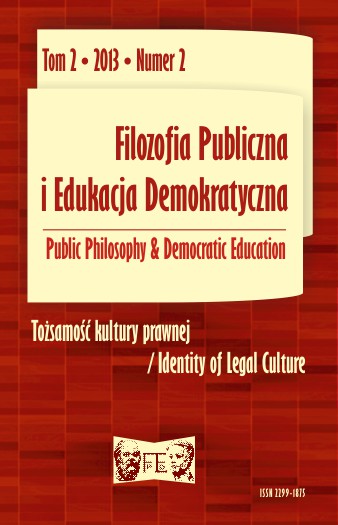 The purpose of this article is to review the controversy between two, potentially most influential legal theorists in 20th century, Hans Kelsen and Carl Schmitt. Their philosophical concepts: Schmittian decisionism and Kelsenian normativism, were based on different assumptions, leading their authors to variant practical conclusions. It is reasonable to infer that the differences in their visions of constitutional order were deeply rooted in different intellectual traditions – not only political (Kelsen’s involvement in defense of liberal democracy unlike Carl Schmitt, whose conservative attitude and critique of liberalism led to support totalitarian state and extreme right wing ideology), but also theological (pantheistic idea of God and fideism; conflict between rationality and faith). So from this perspective „Pure theory of law” can be seen as pantheistic political theology, because „pantheism overcomes the opposition of God and World; the Pure Theory of Law accordingly overcomes the opposition of State and Law”. On the other hand legal philosophy of Carl Schmitt is inspired by the Roman Catholic theological concept of the miracle, whereby God is free from the laws of nature – and in consequence – the sovereign is not bound by the law and may decide exceptions to it.