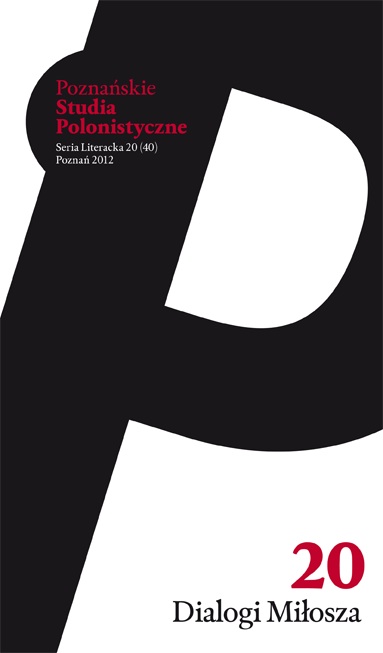 The article is about the ro numerous researchers, and the direct stimulus for the present author was an extensive and well-informed study by Zbigniew Kaźmierczyk, Dzieło demiurga [Demiurge’s Work], where the critic interprets one of Miłosz’s juvenile collection Trzy zimy [Three Winters] as a record of gnostic experience of existence. Kaźmierczyk, who is a convinced proponent, and competent practitioner of the gnostic key to interpreta­tion of Miłosz’s poetry, presents a highly coherent of Miłosz’s second book of poetry, read through complicated gnostic metaphors, which prevents the critic from a definite description of Miłosz as a gnosticist. The poet is rather describes as only (or so much as) a consciously selec­tive user of imagery typical for gnosticism. Incisive analyses of topics in Trzy zimy, which fill chapter after chapter of Dzieło demiurga, convinc­ingly argue that Miłosz’s juvenile foray into the world of dualistic images was not ephemeric or accidental, but rather had lasting and important consequences. Simultaneously, because of their purity and specific inwardness, they provoke a discussion of the role of this imagery, and the related convictions, in Miłosz’s post-war work, when he wrote Rescue; this issue is presented extensively in the article. The absorbing and fascinating description, fascinating in itself, of Miłosz’s juvenile imagination, presented by the author of Dzieło demiurga, is presented as a perfect background for discussion of further Manichean themes in Miłosz’s poetry. In a wider context, the article presents also the basic anthropological problems in Miłosz’s work, problems that arise from his juvenile experience of Weltschmerz, and which he radically overcame in his later years.