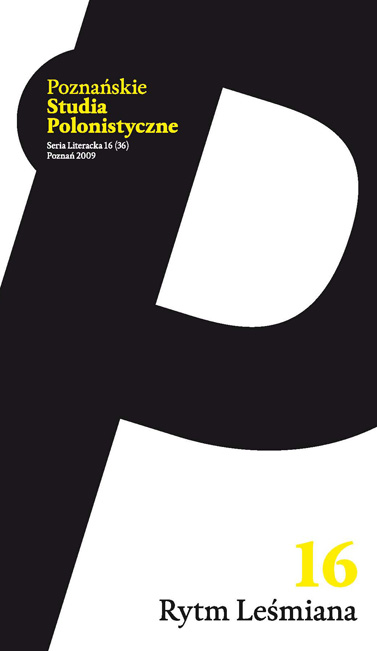 The book Twórczość Leśmiana w kręgu filozoficznej myśli symbolizmu rosyjskiego written by Sobieska is a pioneering attempt at combining a discussion on the literary output of the author of Dziejba leśna with the reflection stemming from the tradition of the Eastern Orthodox Church. The book, notwithstanding its shortcomings and self-imposed limitations, comprehensively discusses views and opinions hitherto unknown to the Polish reader, introduces and explains the context of the findings of such thinkers as Soloviov or Biely, compares texts written by Russian symbolists with Leśmian’s poems. Sobieska categorizes the problem issues into subsequent thematic ranges (epiphany insight into the nature of being, musicality and the notion of poetical metre, creative imagination, mystical femininity) in order to point at potential sources of the recontextualization of Leśmian’s poetical sensitivity. The findings, being an example of classic comparatistic studies, have been enhanced by iconological and musicological observations as well as by some additional guiding elements facilitating the understanding of Orthodox theology. The present sketch discusses the book and is complemented with a polemics with some of its methodological solutions.