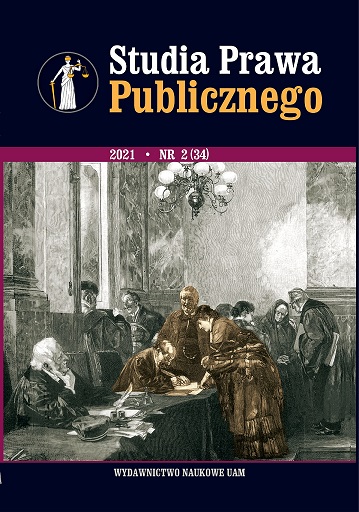 PDF
DOI: https://doi.org/10.14746/spp.2021.2.34.1
Słowa kluczowe:
requirements for candidates for the title of professor, Council for Scientific Excellence, President of the Republic of Poland

The Act of 20 July 2018 on Higher Education and Science is the eighth Polish normative act of statutory rank since 1920 to deal with matters concerning the title of professor, not counting separate acts and their amendments. It is also the first act based on the regulations in force before 1965 to regulate in a single act matters of higher education and science. Despite their new formulation, not all of the solutions implemented by this Act imply a full withdrawal from the regulations adopted in previous years. What is absolutely new in it, however, is the simplification of the procedure and conditions of the proceedings for conferring the title of professor through: (1) a new definition of fields of science (arts) and scientific disciplines (artistic disciplines) based, following the OECD classification, on the two-tier qualification of sciences (with some exceptions); (2) the constitution of the Council for Scientific Excellence, as a new institution, as of 1 January 2021 exclusively endowed with the right to initiate proceedings for the conferment of the title of professor (including refusal) and the subsequent process, ending with a positive or negative decision of that Council. Other solutions of this law have been subject to broader or narrower changes or have been retained in their current wording. Those of such a nature constitute answers to the following questions: (1) On whom may the title of professor be conferred, and in relation to whom, despite meeting the requirements for it, is this unacceptable, for other statutory reasons?; (2) What requirements does the legislator expect from a candidate for this academic title, and to what extent do the expectations placed on them – outstanding scientific (artistic) achievements – go beyond the framework of the previously binding standards in this regard?; (3) What determines the selection of candidates for reviewers in this procedure, and what is the procedure for selecting them?; (4) What are the conditions for a candidate’s legal protection against negative decisions by the Council for Scientific Excellence, taking into account (5) the conditions for the President of the Republic of Poland’s participation in this procedure, which have remained unchanged since 1990?