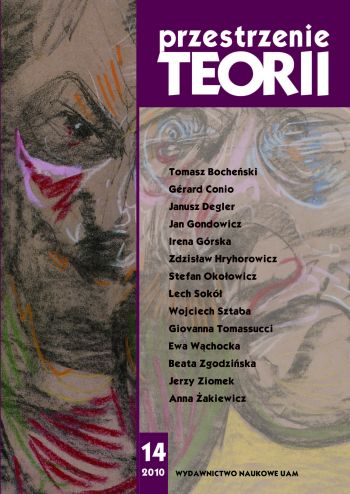 Żakiewicz Anna, Przestrzeń barwna Czystej Formy. Kolor w teorii i praktyce twórczej Stanisława Ignacego Witkiewicza [The Colourful Space of Pure Form. The Problem of Colour in Theory and Practice in the Work of Stanisław Ignacy Witkiewicz]. „Przestrzenie Teorii” 14. Poznań 2010, Adam Mickiewicz University Press, pp. 123-134. ISBN 978-83-232-2210-1. ISSN 1644-6763. Colour was a very important problem in the whole work of Stanisław Ignacy Witkiewicz. Not only a whole chapter of his basic theoretical work Nowe formy w malarstwie (New Forms in Painting, published 1919) was devoted to that but the artist also examined his theory in practice executing many paintings presenting his ideas (e.g. Self-portrait, 1913, Portrait of Feliks Lewiński, 1917, Portrait of Maria Witkiewiczowa, 1918 and many others). A base for that was a harmony of complementary colours: green and red, blue and orange, violet and yellow. Many theorists before Witkacy were interested in that: Wolfgang Goethe, Philip Otto Runge, Wassili Kandinsky. The artist didn’t mention them in his deliberations but a psychologist, Hermann Ebinghaus (Grundzüge der Psychologie, 1897) and other artists only: Paul Gauguin and Pablo Picasso. Witkacy even copied one of Gauguin’s paintings, Te Arii Vahine and described it in his writings as the best example of Pure Form. Witkacy enthusiastically described Picasso’s paintings in his first novel 622 upadki Bunga (622 Downfalls of Bungo, written ca. 1910, first published 1972) and mentioned many times in his theoretical works. The artist appreciated also Georges Seurat’s paintings and his thoughts on colours. Witkacy himself created a detailed system presenting the best colour schemes and described many compositions corresponding to that. In 1938 the artist wrote an article O istocie malarstwa (On the Essence of Painting), which was an opposition to his earlier thoughts. In the end of his life the artist decided that the most important was imagination instead of theoretical rules.