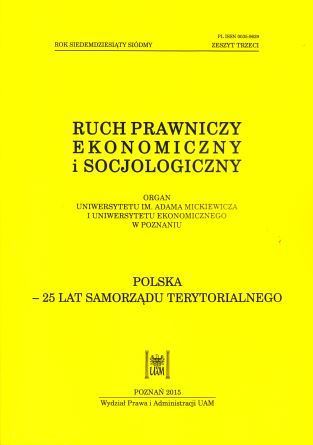 In 2015 we celebrate the twenty-fifth anniversary of the first free local elections to self-governing bodies. Those elections activated local citizens initiatives and greatly contributed to the transformation in our social awareness, leading to real change in Poland’s political regime. The underlying rationale of free local elections, however, was the package of laws adopted on 8 March 1990 which created real self-government, enabled the elections to commune and municipality councils of 27 May 1990 and introduced a new dynamic to the process of the decentralisation of the state.

Changes are always the result of dreams and our ability to realise them. It is possible to make them if there exist organisational structures and institutions which allow such changes to be made. The need for political transformation had long been felt and deliberated on by those involved in spatial development or and for whom the state monopoly status quo was unacceptable. To quote the late and much missed Professor Jerzy Regulski, the implementation of self-governance was departure from the monopoly of central government, which in turn meant an actual change in the political regime. The reform of 1990 broke up five monopolies of an authoritarian state which had existed in Poland since the end of the World War II: the political monopoly of one party, of centralised power, of uniform state ownership, of public finances and the state budget, and of the uniform public administration of the state.

However, it must always be remembered that the possibility of realising dreams of a change in the nature of the state was shaped in the first triumphant stage of the Solidarity period in 1989, and later became a stable basis for the future in the resolution of the First National Congress of Solidarity Delegates and in the ‘Samorządna Rzeczpospolita’ (A Self-governing Republic) document. The success of the real change of 1990 was rooted in the long term determination and persistence of those whose personal experiences were involved in the quest for rationality in land management. Both Professor Jerzy Regulski and Professor Michał Kulesza drew their inspiration to change the political regime from the need to ensure that society worked in a way that would allow the local needs and initiatives be articulated, and inhabitants having the ability to take concrete decisions about the surrounding environment. In this way, the existing possibility of active involvement in local initiatives, incapable of being realised in the former political system, would become a reality and the citizens would be able to make collective decisions about their local area. This would also give a chance to oppose formally the investment logic resulting from the central planning of those times.

The analytic work aimed at the transformation of the political regime that Professor Regulski started in the 1970s during his employment at the University of Lodz were subsequently continued at the Economic Institute of the Polish Academy of Sciences and led to the formation of a group of individuals for whom self-governance became a core value of the new regime and a way of looking at the modern state. The change that took place in 1990 was the beginning of the building of a de-centralised, modern state, the status of which was subsequently confirmed when Poland adopted the Council of Europe Framework Convention for the European Charter of Local Self-Government. Self-government is never an institution whose constitution is ever finished. This was shown during the reform carried out by Prime Minister Jerzy Buzek’s government, which continued the break-up of the monopoly of power and implemented subsidiarity principles at the regional level enabling them to exercise powers locally, in newly created districts (powiat), as well as in the later legislative changes pertaining to the regulations governing the election of mayors (wójt or burmistrz) or the work of the Komisja Wspólna Rządu i Samorządu (Joint Committee of the Government and Self-Government). Today, after 25 years of our experience with self-government, we are much more aware of the changes needed in the self-governing system. They include the strengthening of actual independence of self-government achieved through the ensured free choice of the manner in which self-government bodies will carry out their tasks, guaranteed revenues and the possibility given to commune and municipality authorities of exercising real influence on their size, improved cooperation between communes and municipalities (gmina) and districts (powiat), and, fore and foremost, by ensuring all citizens a chance of co-decision on matters which directly affect them. Changes in the regime of self-governance are a consequence of its assessment by external, independent experts but are also motivated by the natural dynamics of the changes resulting from the very essence of self-governance and its institutions, communes and municipalities (gmina), districts (powiat) and regions (voivodships).

In 2010 associations of self-governing units realised the need for change and amendments to the law on self-governance. Thus, they formulated a number of proposals which were included in a document called ‘Requests to the President of the Republic of Poland to commence work on the white book of territorial self-government in the year of the 20th anniversary.’ This document initiated work on a draft law which in 2013 became the subject of a legislative initiative put forward by President Bronisław Komorowski. The purpose of the new law on the collaboration of self-governing bodies in local and regional development is to strengthen the role of the citizen as well as the community in the work of self-government in Poland. The effort that Professors Jerzy Regulski and Michał Kulesza in their capacity as Advisors to President Komorowski put into the legislative work remains invaluable. It is believed that the involvement of individual citizens constitutes the strength of self-government and is a guarantee of its role at the service and in the interest of communities, individual inhabitants and businesses. Hence the need for enhanced collaboration and the partnership of different bodies of self-government and the increased involvement of citizens. There is draft law that contains regulations supporting these activities.

Under the draft law, a local referendum is seen as an important tool to ensure the participation of citizens in decision-making processes, including those concerning local development plans. Local referenda should constitute a mechanism used to solve local issues of material importance to residents. Their result should be binding regardless of the turnout.

Self-governance helps to create and strengthen the natural inclination of individuals to act together in areas where because of their social, business or cultural ties, a local community spirit develops. In today’s world of global challenges and competition, we are looking for a space for the individual which provides a feeling of security. Another important value of self-governance is the possibility of creating affiliations with a community as well as individual entrepreneurship, social activity and a regard for the collective memory of the symbols of a place. The ability to participate in community life is inseparable from the functioning of democracy at a local level, with the consultation process, election of public officers, or participation in referenda.

Self-governance is a special value which gives each of us a chance to exercise a real influence on local matters. It therefore occupies a very special place where politics has a personal dimension. The variety of self-governance means at the same time a variety of development policies since there are different communities, with different emotions, different experiences or ability to participate in democratic management. This variety is a special asset in the process of the stabilisation of the state as a whole. The diversity of opinions and experiences, appointments to public office of citizens not affiliated to or necessarily recommended by any party creates the solid foundations of a democratic state. This feeling of freedom within self-governing communities must be continued and promoted.

The authors of many of the texts published in this issue of Ruch Prawniczy, Ekonomiczny i Socjologiczny devoted to self-governance are, at the same time, authors of the transformation of Polish law and Poland’s administration in the last 25 years. Contributions submitted by, among others, Prof. dr hab. Irena Lipowicz, Prof. Jerzy Stępień, Prof. dr hab. Jerzy Buzek, Prof. dr hab. Leon Kieres or Prof. dr hab. Hanna Gronkiewicz-Waltz are the best proof of the capital importance that self-governance plays in a democratic state. I thank Professor Teresa Rabska and the editorial staff of Ruch Prawniczy, Ekonomiczny i Socjologiczny for their active involvement in questions of self-government from the very beginning. This issue is entirely devoted to a range of legal, economic and sociological aspects of new challenges facing self-government and its regime. Once again I thank them for such active involvement and participation in the jubilee celebrations of Self-Government and this special issue of the journal.

We need self-governance not only to feel that we can influence decisions being made about local issues but also to be continually able to renew our confidence in institutions at a local level, and through their collaboration at the national level. 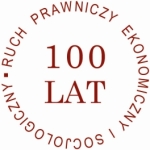