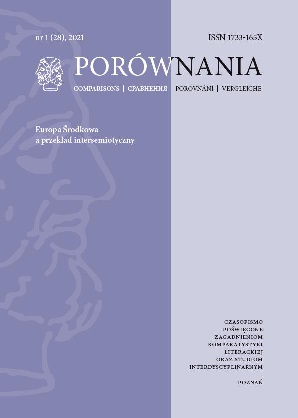 For years, Porówania has focused on diverse correspondences between cultures, ethnic literatures, areas of art, inhabitants of various geographical spaces, imagined communities, contemporary discourses, etc. This volume is dedicated to the conversational strategies artists established between language and the visual arts, but also to the broader, and often variously defined, area of Central Europe. We were interested in the relationship between different (thematically and functionally) intersemiotic translation strategies with regard to cultural events and changes in the socio-political life of Central European nations, dominant communities and ethnic minorities. We also wanted to address the similarities and differences visible in this area on the basis of the different literatures and art (domestic and emigration; high-art and popular art). The selected case studies gathered in this volume are meant at least initially to outline a map of diverse intersemiotic relations, the coordinates of which are determined, on the one hand, by the broadly understood category of visibility and, on the other, by the cultural, social, political changes imposed on the Central European nations and communities they helped form. We wanted to ask the following question: does the changeability of the intersemiotic phenomena and theories justify the strength of the caesura, which we used to take for granted in ethnic literatures of this part of Europe? Does it help to better describe the “isms,” which have been developed by modern art and literature?