"Porównania” has been published annually since 2004 and biannually since 2011.  It includes original works and translations of comparative research within literary studies, theory and history of culture, theory of science, anthropology, art study, the cinema, music but also comparative research on history, postcolonial studies, gender, pedagogy, law, contemporary media and the relationship between the humanities and natural sciences. There are also polemics, reviews, surveys of comparative works and a list of received books.

Vol. 30 No. 3 (2021): Literature on Brexit and other socio-political crises of contemporary Europe 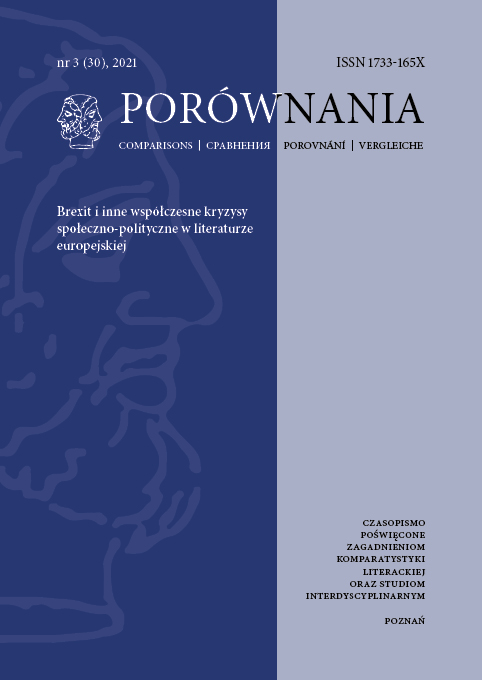 In 2016, Great Britain held a national referendum on whether it should remain in or leave the European Union. A few year later, notwithstanding the decision’s legal footing, the British Isles have remained in a state of impasse, perhaps even chaos. Over the period, the United Kingdom’s credibility and prestige have dramatically decreased, which has disrupted certain sectors of the economy as well as enhanced the centrifugal forces of separatism. Furthermore, it has had wide ramifications for Europe, inflicting upon it an acute illness of systemic nature. On top of that, people in the Isles and on the continent have had to struggle with the spread of the COVID-19 pandemic. There is no doubt that various troubles, calamities and recent political crises have taken a heavy toll on the collective frame of mind.

Since literature is a good barometer of the overall mood, it is our intent to devote the upcoming issue of the Porównania journal to presenting some watersheds as well as turning points in the most recent history of British and other European societies. Brexit, in this regard, is hardly a panacea for the ills of the modern world, but rather a trigger that has turned ‘the familiar realm’ into a tailspin. With the above in mind, we would like to invite scholars, whose field of expertise is literary and comparative studies, to participate in a debate on the phenomenon of Brexit, and its widespread consequences. The pressing question here would be whether the British version of ‘divorce’ should not be read beyond a limited, geopolitical locality. Perhaps, after all, it is a symbolic act that reflects processes of much broader meaning, observable not only in the United Kingdom, but also in other European countries as well as in the United States.

In terms of its implosive potential, Brexit has definitely contributed to prompting a correlated discussion over such thematic areas as: expansion of national/ist populisms, particularly with respect to recent migration waves; reoccurring problem of cultural and political divisions within given societies, along with the inward-bound processes of disruptive identity formation; finally, dramatic conflicts between an embedded value system and its alternative [destabilizing] counterparts. These are just a few notions reflected in contemporary literature. How have they been examined by writers in the British Isles, and how have they been touched upon by other European literary cultures? Were there any earlier prefigurations of the current crisis? In the wake of national/ist egoisms and the ‘policy of division/decomposition’, it would be also vital to learn who falls victim to such circumstances in the first place, and to whom we, as humanists, should show empathy and give support.  Should literature intervene by presenting an anti-crisis plan/agenda, or should it merely diagnose a crisis as silhouetting against the horizon? Finally, has the specter of Brexit found its way into Polish prose, and if so, then what shape has it taken?

We predict that such a juxtaposition of various cultural and literary contexts shall aid not only in outlining a wide horizon of critical thought, but also in sparking a fascinating discussion. It would be particularly valuable to develop an inter-cultural perspective, whose illuminating benefits transcend the humanities as such. Scholars interested in the aforementioned thematic areas are asked to submit abstracts of around 200 words, along with proposed titles of their articles. The special issue of Porównania will be published in Polish and English so everyone is welcome to submit either language version of his/her essay.

Introduction. Brexit and Other Contemporary Socio-Political Crises in European Literature

The Crooked Mirrors of the Crisis? Brexit-Related Socio-Political Conflicts and Divisions in Contemporary British and Irish Fiction

Northern Soulscapes: Writing through Brexit in the work of Gerald Dawe, Angela Graham and Dara McAnulty

From Unparalleled “Greatness” to Predictable Insularity. A Composite Sketch of “Warped Britishness” as Drawn in Selected Works of Contemporary English Fiction

Under Irish and Foreign Skies: Home, Migration and Regrexit

Travelling Europe, Travelling through Crisis: Disintegrated Journeys in Dorota Masłowska’s A Couple of Poor, Polish-Speaking Romanians and Zinnie Harris’s How To Hold Your Breath

Are We In This Together?: The Polarisation of the British Society and the Marginalisation of Otherness in Ali Smith’s Seasonal Quartet

"Some Corner of a Foreign Field That Is [Not] For Ever England”: Brexit and Poetry

The Last Day and Brexit: Delusions of Future Past

Swan-Eaters: Relative Otherness in the Experience of the Polish Economic Migration to Great Britain After 2004

On Value Systems, Commitment and Explaining Poland in Crisis to Germans by Polish-German Writers from Berlin: Brygida Helbig-Mischewski and Emilia Smechowski

Radicalisation Tinted by Nationalism or How to Turn a Counterrevolutionary Into a Reactionary: Ingo Schulze's Die rechtschaffenen Mörder (The Righteous Murderers) (2020)

Schiller Wearing a Mask: The Literature of German-Speaking Countries vs. the sars-cov-2 Pandemic

The Languages of the Crisis: Pathographies in the Latest Serbian Literature

On the Spirit (of Brexit): With Additional Remarks on the Thymotic Stimulation of the Nation in the Latest Polish Literature